Harrrrrrr Mateys
It be Cap'n Mavericks School of Piracy Harrrrr. Today we are going to talk about weapons Harrrrr. Usually the typical pirate would carry with him a big bunch o weapons. Here be some examples mateys.
Musket for far away combat Harrrr

A Boarding AX to cut nets and riggings Harrrr.

The ever popular pistol

A pirate cutlass, not too long and not too short, to protect themselves if the ship be boarded by enemy pirates or worse, the Navy!! 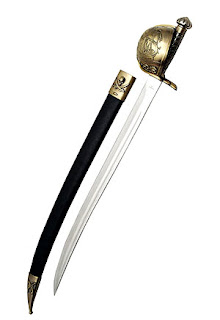 They would also have bombs filled with musket balls, nails or broken glass or anything else they could find that would make shrapnel Harrrr.

But this be the Cap'n favorate weapon Harrrr.

Do you know what it is Harrrr. 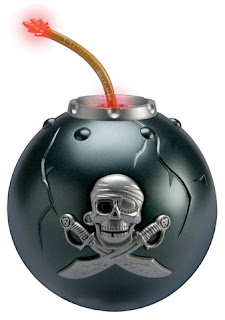 It be a stink bomb Harrrrrrr.

The pirates would take a piece of cloth and fill it with anything stinky Harrrr.

They would fill it with rotting meat, dead seagulls or other bird, rotten rat, dead mice, or anything else you could think of that stunk so bad Harrrr.

Then they would put a fuse in it and toss it on the other ship Harrrrr. It has been reported after the stink bombs would explode sometimes the sailors would jump off the ship to get away from the smell and to get it off of them Harrrrr.

Posted by Maverick the Pirate at 12:39 PM

Cap'n would never be short on stink bombs if the Boss Lady Big D were onboard with woo - she can stink out a room in no time at all.

We agree with the OP Pack. And if stink bombs don't work, rolling in dead things is two steps away from chemical warfare.

Don't know much about them other things, but the stink bomb????
I know Scampi would roll in it, if it smelled bad, for some strange reason, the worse it smells, the more he rolls....

Hi Cap'n Maverick, sir! I liked learning about all the pirate weapons, but I have to say - if there was a Golden Retriever on the ship that got stink-bombed, it would not jump off! Woo-hoo!

All those are scary weapons!
Kisses and hugs
Lorenza

Those are pawsome weapons. Can a corn shank be a weapon too??

Mom yells at me for leaving stink bombs all the time!

When Dave first started on the fish oil supplement he takes, he was dropping lots of those stink bombs. Ha roo roo roo!
Play bows,
Zim

Kind of a waste of stink, isn't it? Now when we find something especially stinky, we like to roll in it! Our favorite so far is possum poo.

Hey, maybe I should make a stink bomb out of Wilbur!