Harrrrrr Mateys
It be Wednesday Harrrr. Ye know what that means another instalment of Cap'n Maverick School of Piracy Harrr.
This be the Prince of Pirates Harrrrr. His name be Jean Lafitte.
Nobody knows where he be born Harrrrr. He could speak French English Italian and Spanish Harrr that be a lot of languages Harrr. He appeared in New Orleans in 1803 and was familiar with the bayous and marshes from New Orleans to the Gulf of Mexico. Harrr, that gave him an advantage in his trade of privateering, or bein' a pirate. Harrr.
Jean Lafitte fought in the battle of New Orleans in the war of 1812 on the American side . It be quite possible he turn the tide of battle so the Americans won. Lafitte and his men were pardoned for their bravery Harrr.
After that Jean Lafitte disappeared and nobody knows where he went Harrrr.
Ye Mateys can find out more about Jean Lafitte on this web site Harrr.
http://www.cindyvallar.com/jeanlaffite.html 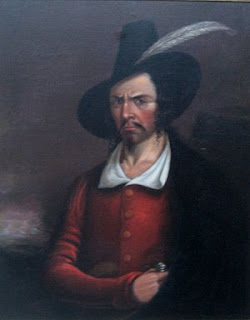 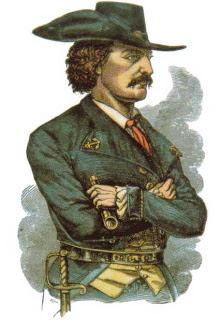 Posted by Maverick the Pirate at 1:10 PM

Hi Cap'n Maverick, sir! Wow, Jean Lafitte was really interesting. I'd heard of him (we thought he looked like Yul Brynner) but I didn't know that no one knew where he came from or where he went. Well, after learning about those other pirates who met bad ends, maybe it's better not to know. Good lesson!

You better watch out Capt'n, you see where all of theses pirates end up, lost or in Davy Jones Locker?
Time to get a real job on a ship like me.
-Kira The Navigator!

hello capn maverick its dennis the vizsla dog hay i am pretty shoor jean lafitte went on to a profitabul kareer playing jack sparrow in the famus pirates of the caribbean dokyoomentries!!! ok bye

No one knows what became of him? Then, Mav, he could be a long lost relative of yours! (Okay, on second thought, that's more than a little weird. But still, stranger things have happened. . . )

That is a lot of languages. I only speak Siberian fluently, but I understand a little bit of English and a couple things of feline, mostly "hiss".

See my blog today for a special award for Woo!
-Kira The BeaWootiful

Woos Cap'n! Our bipeds went to New Orleans a few years ago, mom says she remembers reading about Jean Lafitte on signs around town. He sounds like he was a good-guy kinda Pirate!