Harr, Cap'n Maverick here. It supposed to be cold last night with ice storm, like that will bother a pirate, harrrr. Anyway Mom set up my Life Raft and made me come in. I love my Life Raft, it has a port hole door and a window over the poop deck. Thar be windows port and starboard too. Thar be pockets on the side for ballast or pirate treasure. My Pirate Life Raft look just like this one. Now thar be no ice last night but Cap'n Mav really enjoyed his bucket of grog and sleepin in the Life Raft. Yer Cap'n expecting to be in tonight too and maybe those humans will get a foto of the Cap'n in his Life Raft for all to enjoy.

Cap'n Maverick the Pirate
Posted by D'Azul Siberian at 5:08 AM 3 comments:

Harrr, mateys. Cap'n Mav here. The humans went to Union Station and Science City over the weekend. Lisa had to do some work at the planetarium for her astronomy class. Thar be a Christmas tree show at Union Station and one of the trees is done up as a pirate ship. Thar be a mast and sail, jolly rogers, a cannon with tree, treasure chest and booty. Gripes my hide the humans did not take the camera and sneak a foto. Even though fotos be forbidden. Thar be some talk about buying it but it be pretty pricey for a Christmas tree, even for the ole Cap'n Mav. Not sure when that show ends but its free. Thar be a shop there with shelves O' pirate items too. Me thinks a pirate expedition to check out Union Station be in order.

Cap'n Maverick the Pirate
Posted by D'Azul Siberian at 5:50 AM 2 comments:

Harrr Mateys. Cap'n Mav here with a belly full O turkey. I wish. We got a piece of turkey liver and that was all. There be a gallon O gravy left over and yer Cap'n has his sights set on that right now. There be some turkey too. It be in the cold box in the house. Harrrrr. Maybe the Sea Wench Stella can get it open. Or push it over and all the booty spill out. Zim, any fancy ideas? How bout Althea Red Eye, ideas?

Stella says a Santy Claws be coming soon and we can get what we want or make em walk the plank. Harrrr.

Cap'n Maverick the Pirate
Posted by D'Azul Siberian at 6:42 AM 4 comments: 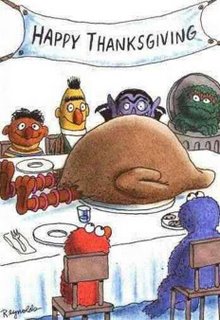 Harrr Mateys. Somebody sent me this great cartoon of the Sesame Street pirates and their booty. Shiver me timbers, that booty looks a bit like Matey Big Bird. I wonder of they made him walk the plank, harrrr. Anyway, me thinks all my mates would get a chuckle from this. Keep up the hunt for turkey booty. I found ours in the sink but it be hard and cold and I could not reach it.

HARRRRR. Cap'n Mav here mateys. Our pal Stella now has her own blog and you should all go welcome her to the sail the 'net with us. Stella not be a siberian but she lives with a boat load of them so I think she qualifies. Plus the muscle she would add on a pillagin' expedition would be valuable. Welcome aboard Stella, come be a pirate.

Cap'n Maverick the Pirate
Posted by D'Azul Siberian at 7:12 AM 2 comments:

Harrr mateys, after a long weekend locked out of the office again, gotta get me own key there, I have found a new treasure map.

Cap'n Mav thinks we may find that turkey booty with this one, or something good besides. Mom got booty from the Lin-con dog show, venison bits. Yum. But thar not be many of them in the bag. She says free sample so all the better.

Cap'n Mav's bestest human friend Lisa the Mean got her wisdom toofs out today. Harrr, hope it doesn't make her stupid. She pretty smart and all before.

Posted by D'Azul Siberian at 3:52 PM No comments:

Booty to go for 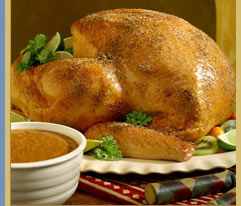 Harrr Mateys, here be the booty to start looking for. Cap'n Mav was doing a bit o research about this Thanksgivin thing and found this pic. Looks scrumpdiliumptious to me and that be gravy thar too. Its only a week away so the crew needs to start getting their plan together. This one be right on the table mates, no need for a map. Best be that every home will have one, or so the Cap'n hears. Plenty to go around mates. Zim, maybe this be what is in your treasure chest, do some sniffing and find out. Althea Red Eye, get busy girl, up to the crow's nest and keep em peeled for turkey. Turbo, get Lex and Fargo in on it. Tear that kitchen apart until you find that turkey. Harrrrrr

Cap'n Maverick the Pirate
Posted by D'Azul Siberian at 5:26 AM 4 comments:

Harrr, I be hearin' about some kinda holiday comin' up. Mom calls it cooking day. Seems like a perfect chance to get good pillagin' to me. Pears be nearly gone now, so methinks stocking up on something else is a good plan. Must give this more consideration. 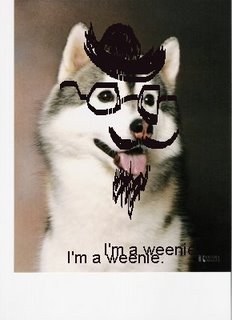 Harr, Cap'n Maverick here. we have hacking success and I love this picture of the weenie so much I have posted it here too. Harrr. Dancin on the poop deck tonight, buckets of grog all around, and heave to on that kibble bag. Make it a party mates.

Harrrr, Yer Cap'n Mav is back with breaking news. Rumor is that new Juarez (AKA the Weenie) photos will be posted on the D'Azul blog tomorrow. Me thinks us pirates should add some interest to this boring event. I be searching for the perfect pirate hat to add to Juarez's image as a big joke.
http://www.captjackspiratehats.com/ has some great hats, too many for Ole Cap'n Mav to be able to pick just one. Me thinks every pirate needs to go take a gander at the hats and say which one we should use to sabotage the new photo event. If any pirates have other ideas, let the Cap'n know. Harrrrr.

Harrrr, Cap'n Mav is getting mighty tired of this. Once again the fuzzy butts are going away for the weekend and turning off the computer. Shiver me timbers, that should be done by now. At least weenie Juarez is staying home. He is all about himself now that he is a CH. Harrr. Cap'n Mav is a CH too. And Juarez doesn't have his own blog, doesn't even want one. I heard that a photo of Juarez came that makes him look like Yoda. Harrr, wish I could get my paws on that one.

We are getting some good pirate ship names, except for that Rotten Pear comment. Lisa thinks my ship should be named Ship of Fools.

Well ahoy mateys, Cap'n Mav is shipping off now for the weekend. Don't be walkin no planks now.

Cap'n Mav The Pirate
Posted by D'Azul Siberian at 5:38 AM No comments:

Ahoy Mateys, Cap'N Mav here. I decided to take a break from the booty search, there be pears a bunch on the ground now. I found this picture of a pirate ship and really liked it.

All nice and shiny with good colors and floats good too. Maybe we could get a ship like this one. Harrr, then we need a name for the ship. I thought of a few like Woooo of the Waves, and Howlin Dawg. I did find a site that makes up names for pirate ships

But some of the names were pretty harr scary, even for your ole Cap'n Mav. How about we all pitch in and name the ship. What say ye mates? Are you up to it?

Harrr, mateys. Your Cap'n Maverick is fogged in this morning. I B searching around the 'net for stuff, mainly a new treasure map, and found a really cool site. www.piratepete.com If you enter by swinging across you can post poems (Dave, a pirate Haik-woo?), and there are other things to keep a bored fogged in pirate busy. Harrr, a bored Pirate is a pirate in trouble, thats the truth. Your Cap'n didn't have time to check out all the nooks and crannies in pirate pete's ship and has to go back soon.

Cap'n Maverick the Pirate
Posted by D'Azul Siberian at 6:44 AM 2 comments:

I hear that weenie, not-a-pirate Juarez is now a new champion. Great, thats just great, now he won't be gone half the time to shows and us pirates will have to put up with his stupid niceness.

Selena did a great job of spying for us. She say something about a "Golden Driller" that was in Tulsa. She say it B a giant statue made of gold that just stands outside. Sounds like booty just waiting to be taken. Selena also say something about a Port of Catoosa that close to Tulsa-place. We can sail the ship down there and snag the Golden Driller. Sounds like a plan. Unfortunately her spy-cam was not working so we have no photos. Mapquest, don't fail me now.

Any pillagin' tales from the rest of the crew?

Cap'n Maverick The Pirate
Posted by D'Azul Siberian at 5:54 AM 4 comments:

I can't believe it

I think we have discovered a pirate in hiding. Meeshka is calling for an uprising on one of the email lists. I heard the AO4 is in on it, so whats the news Zim? Meeshka, do you want to be a pirate?

But I cannot believe Mom and Lisa are leaving me here and going to Okly-Homy. They leave tonight and won't be back until Sunday night late. Of course blogging is out of the question unless I can pirate a way into that office. Maybe the man will forget and let me in. Maybe I can trick him, he is fairly easy to trick.

Anyway, Selena B going so she can report on all the pirate doings at the dog show. Hopefully that wimp Juarez, who does not want to be a pirate, will come home a champion. I B swabbing the decks and scraping the hull to get ready for the winter pillaging season. Pears B almost gone but there are plenty in the hold of the ship.

Sail on, pirate mateys, sail on.

Cap'n Maverick the Pirate
Posted by D'Azul Siberian at 5:28 AM 2 comments: