Harrrrr yer Cap'n be back

Harrrrrr Mateys
Yer Cap'n been missin' in action for a while Mateys. Harrrrr, now he be back.
Check out these cool bags that mom get the Cap'n. 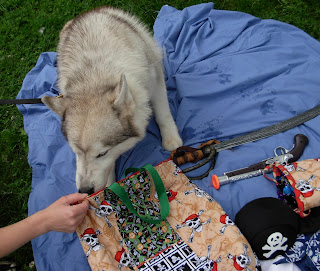 Here be one call the Super Shopper. 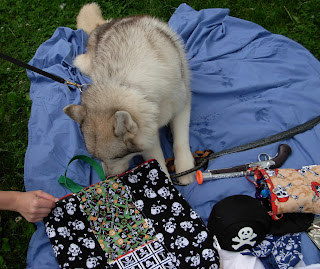 Here be the other side of it.
See it be total pirate theme. Mom have Matey Zim's mom make them for me. It be big enough to hold all me pirate stuff, harrr, even me sword. 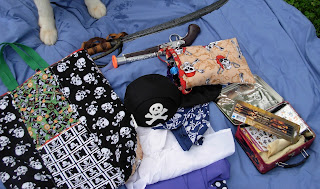 See the little bag there Mateys, the one with the skulls and red bandana, harrr. That be a Huffle Duffle and it be perfect for me booty. Harrr, Ye can see some booty in there right now. It be what yer Cap'n use fer his display at some dog shows, like the National. Harrrr. 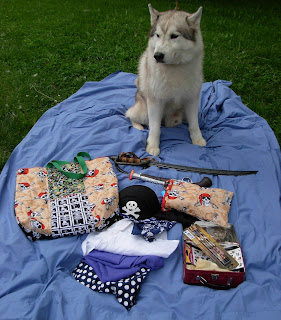 This be part 2 of the Whydah Galley Harrrrrrrrr.

The Whydah Gally sunk in a storm April 26 1717 a half mile off of Cape Cod Harrrrrr. The Whydah Gally was originally a slave ship from London Harrrr. It was filled with cloth liqur hand tools and other small goods to be traded for 700 slaves Harrrrr. After it made its way to trade the slaves it came back to England with gold and other booty Harrrr. Then on the Whydah's second voyage it was perused by two pirates vessels Harrr.the Whydah had gold silver indigo sugar and other goods abord at the time. Cap'n Samuel "Black Sam" Bellamy on his ships the Sultana and Mary Anne seized a dozen men form the Whydah and let rest of the vanquished crew take the Sultana Harrrrr. He claimed the Whydah as his flag ship Harrrrr. In April of 1717the pirates where robbing other vessels Harrrrrr. They where on there way to Richmond Island off of the coast of Main But they diverted to Cape Cod where legend has it Black Sam's mistress lived Harrrr. A huge storm came in with wind gust of 70 miles Harrrr. It trapped the Whydah in the surf and it cashed in to a sandbar then sunk Harrrr. There be 146 crew men and only two survived the storm Harrrrrr. England demanded salvage from the wreckage the capes locals handed back some wooden beams, guns and some gem studded rings form the dead fingers of crew men Harrrr how terrible is that Harrrrr. One of the sole survivors made a map of the wreckage and Barry Clifford used it searched for a couple of years and found the ship In 1998 Harrrrrr.

This be a picture of Barry Clifford and the bell of the Whydah Harrrrr. 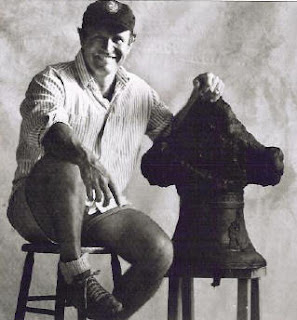 picture found on http://www.atochagold.com/TheWhydah.htm Harrrr. The Whydah pirate ship is part of a traveling exhibit Harrrrr. The Exhibit is supposed to come to St. Louis in 2010 Harrrrr Yer Cap'n so wants to go Harrrr!!!!!!!!! Yer Cap'n found a good article about it on this site http://www.nationalgeographic.com/whydah/story.html Harrrr.

I wonder if yer Cap'n wears his costume they will let him in?

Posted by Maverick the Pirate at 6:36 AM 5 comments: