Harrrrrr Mateys
Ye have all seen the movie Princess Bride where they talk about the Dread Pirate Roberts?Harrrrr. Well that character be based on the real life pirate Black Bart or Bartholomew Roberts Harrrr. He be one of the most successful pirates of the golden pirate age Harrrrrrr. Those be good times mateys. Black Bart captured over 400 ships and over 50 million pounds of loot! Harrr way to go Bart. He drank lots of tea not so much rum Harrrr.
Black Bart always wear a hat with a red feather Harrrrr.
Black Bart also had two diffrent pirate flags Harrrr. 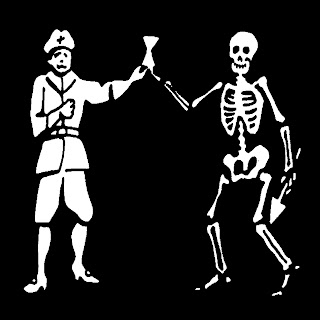 Are these flags cool or what Harrrr. 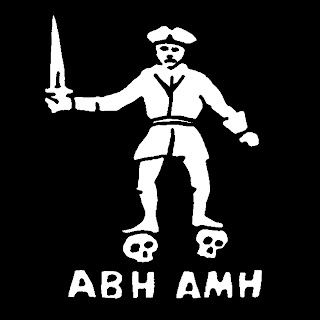 This be a pic of Black Bart Harrrr. Ye can see one of his flags in the background Harrrr.
He became a Cap'n in 1719 Harrr. Unfortunatly he was only a pirate for 4 years Harrrr. He died in Febuary 10 1722, shot by a grape shot during a battle Harrr. His Crew dumped his body in the sea as he requested then they fight on but after several hours of fighting they where overtaken and thrown into prison at the Cape Coast Castle in West Africa Harrrr. This be when the largest pirate trial ever happened Harrrr. 54 of his crew men where hanged, 37 of his crew where inprisoned, 70 African pirates where sold in to slavery and the rest were released. Harrrr. Not a great ending for a great pirate. Yer legend will live on Black Bart Harrrrr.
Cap'n Maverick the Pirate

Posted by Maverick the Pirate at 12:47 PM

Ahoy, Cap'n! What a story!!!! I guess there were more than a few unhappy endings for Pirates, eh?

Wooo! I am glad I have a real job on my own boat, and am not a pirate, they don't seem to have too many happy endings, do they? (I affirm that I made my brother walk the plank, but to no fatal problems)
-Kira The BeaWootiful

Thanks for the story!
I enjoyed it a lot!
Kisses and hugs
Lorenza

This sort of thing never happens to Captain Jack Sparrow!

Hi Cap'n Maverick, sir! Wow, what a great story about Black Bart! That's a lot of ships and a lot of loot. And he had style, too. Too bad he couldn't have lived happily ever after, but I guess that's not the way those stories end.

The life of a pirate seems pretty short. Good thing you have all sorts of Sibes watching your back!