Harrrrrr Mateys
Today be Wednesday Harrrr. Ye mateys know what that means. Another day of Cap'n Maverick the Pirate's School of Piracy Harrrrrr. 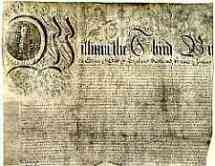 This be a picture of his privateering license Harrrrr. This license gave Captain Kidd the right to attack any French Merchants Harrrr. A little later Captain Kidd stole a ship and named it Blessed William Harrrr. Then the crew abandoned him to turn to piracy Harrrr.

In 1695 Captain Kidd was talked in to a shady deal from Richard Earl of Bellomont Harrrr. Captain Kidd was to command a 34 gunship Harrrr. He was also given a letter of Marque to attack Pirates and French East India Company Harrrr.

Kidd insulted two Royal navy ships on his way to New York Harrrr. Kidd Refused to lower his flag and had his Crew show their back sides to the Royal Navy as they passed by Harrrrr. His ship was boarded and they took most of Kidds best Crew men Harrrrr.

Running out of luck, Kidd lands on a pirate island at Madagascar and turns to piracy Harrrr. He lost all hope of pardon Harrrr. Thar be a warrant out for his arrest Harrrr. Kidd moved all of his loot and buried some of it Harrrr. 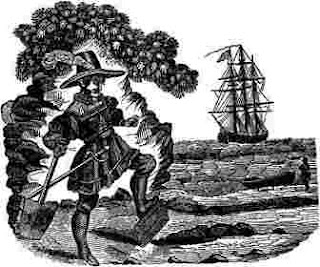 Bellomont misled Kidd and told him he would be pardoned Harrrr. When Kidd came to his office he was quickly arrested Harrrr. After a year in prison and some quick trials Harrr, he was accused of murder and piracy Harrrr. He was hung in a cage, tarred bound with chains and irons Harrrr. He be hung out to dry for several years at Tilbury Point Harrrr on the River Thames. That was to warn any sailor that turned pirate that this could happen Harrrr. Not a very happy ending there mateys Harrr.

If ye mateys want to learn more about Captain Kidd's adventures or more of his story or to hear his Ballad, go to this site Harrrr. http://www.thepiratesrealm.com/Captain%20Kidd.html

Posted by Maverick the Pirate at 11:05 AM

Did anyone ever find the loot? We could buy a lot of ham with that!

Nice history lesson!!! Now we wonder if today he is "Blessed Willima"?

Harr, Mav-
We LOVE pirate lesson days. Thanks for the Kidd biopic--very cool.

Hey, we've been a little delinquent about blogging and just now got your tag. We promise we'll post our photo later this week.

Hi Cap'n Maverick, sir! Thanks for tagging me - that was a fun game! Wow, Captain Kidd sure didn't have a very happy ending, and neither did Blackbeard. I guess being a pirate is harder than I thought. Before going to pirate school, the only pirate I knew about was Johnny Depp - he's my mom's favorite.

That's a pawsome adventure. Too bad it's not a happy ending

Wooo, that was an interesting pirate lesson, Dad won't let me put a pitate flag on my boat, he says we are not pirates... bummer.
that was a lot of schooling, time for a nap
Kira, The Florida Siberian

Thanks for another pirate lesson. Cap'n Mav. Me thinks perhaps its the pirate in me that loves to dig and dig - we be looking fur buried treasure!

Whoa! That's a scary story. I thought being a pirate was all fun and games and just taking treats as your booty, but it is more dangerous than I thought.