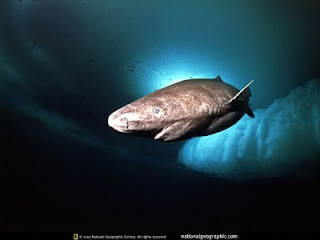 This shark is mainly a cold water shark and is found in the Atlantic Ocean in polar lattitudes but sometimes found further south in the Gulf of Maine and sometimes the Gulf of Mexico Harrr. During the summer it likes to go down in the depths but during the cold winter months it is found close to the surface near the ice floes Harrrr. The Greenland sharks feeds on fish, sea lions seals and crustations Harrrr. 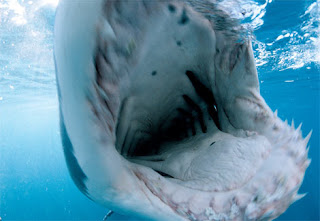 Look at that mouth, it looks hungry Harrrr. The Greenland shark used to be fished for the oil in its liver Harrrr. The Greenland shark meat is poisonous Harrrrr. If ye mates have to eat him ye have to boil the meat several times or dry it Harrrrrr. Does not sound that tasty to the Cap'n Harr. It be the one shark that kill you two ways, it eats you or you eat it. Harrrrr
Danger rating is Dangerous due to its size
This lady caught a greenland shark while ice fishing Harrrrrr.
Just tells ye you never know what you are going to catch Harrrr.
Ye mates can learn more about the Greenland Shark at this site Harrrr.
Posted by Maverick the Pirate at 12:47 PM

Wowzers! I'm not sure a handful of kibble would be enough for that guy!
Play bows,
Zim

Wooos! That fishy has some scary looking jaws, I think I will stick to my ghosts!
-Kira The BeaWootiful

I am scared to think how many sibes you could fit into that mouthymouth! Looks pokey!

The Z rollers, Oz and Zozo

Until you started Fish Day Wednesday, I never knew there were so many kinds of sharks! This one looks particularly menacing!

NAK and The Residents of The Khottage Now With Khattledog said...

And I thought I had big teeth!!

Hmm, I think I'll stick with sushi ... and not the puffer fish kind either!

Well, I'd like to see a purple one. But not up close.